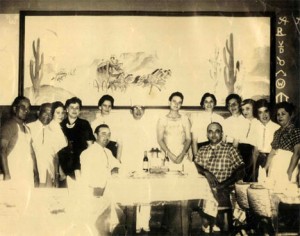 Clarence Minetti and Richard Maretti with the original staff

Welcome to the Far Western Tavern – Contemporary California Ranch Cuisine inspired by local traditions. For more than five decades, spanning three generations of Minetti family ownership, the Far Western Tavern has been driven by a timeless appreciation for regional cuisine and an inherited commitment to hospitality.

Our restaurant is recognized as a landmark of Santa Maria Style Barbecue, a renowned regional fare rooted in native ingredients and methods that were first popularized by 19th century rancheros. Our menu blends this local barbecue style with other dishes that reflect our family’s heritage in the Santa Maria Valley’s Swiss-Italian ranching community. Our menus are graced with fresh flavors from the nearby farms, ranches and vineyards.

The Far Western Tavern was established in 1958 by Clarence and Rosalie Minetti along with Rosalie’s cousin Richard Maretti and his wife Jean. Originally located in the historic Palace Hotel building in the town of Guadalupe, the Far Western Tavern quickly became a hometown favorite, attracting locals and visitors alike with its legendary fare and welcoming ambiance. Today the restaurant has its home in a beautiful building in Old Town Orcutt.

Over the decades, the Far Western Tavern has received glowing accolades. In 2009, Sunset Magazine named it one of the West’s best barbecue restaurants. When Bobby Flay came to the area for his Food Network show BBQ with Bobby Flay, he chose the Minetti family to show viewers how to prepare Santa Maria Style Barbecue. In 2012, the Far Western Tavern and the Minetti family were showcased in an episode of Man, Fire, Food on the Cooking Channel.

Since those early days, the Far Western Tavern has outlasted countless culinary trends, remaining true to its original style while keeping pace with contemporary tastes. As Clarence was fond of saying, “To last in this business, you have to like people and you have to serve great food. It’s that simple.” Today, Clarence and Rosalie’s children and grandchildren remain committed to advancing the Far Western Tavern tradition.